Making his third appearance in the members projects section, Keith has sent brief details of his latest build: a wing sail land yacht!

It has a main wing with a symmetrical aero foil and a Mylar trailing edge which is removable for stronger winds. Overall rig height is 60” and it’s 56” long, 36” wide built from plans found on the net

Not tried it yet, looking for a suitable venue. An Aerodrome seems a likely choice. 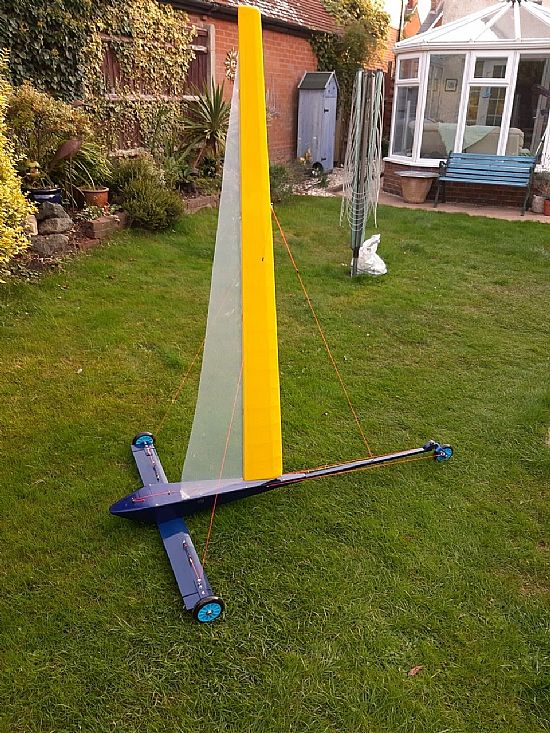 My lockdown Project has been 'Riblet' based on a free plan and article by Glynn Guest in Model Boats Magazine May 2019.

I wanted a small powered model that would be useful and easy to transport for days when poor winds prevent yacht sailing.

This is a simple semi scale r c model based upon small rigid inflatable boats.

It is powered by an NQD waterjet drive unit which gives both steering and propulsion.

The inflatable illusion is simply provided by grey pipe lagging foam to the perimeter. (also ideal for providing buoyancy)

See attached photos of the magazine cover and of my model.

I had some issues initially overcoming leaks and splashing onto the rear deck at the transom and accordingly had to make modifications including a splash guard across the rear.

I have trialled in our paddling pool and now seems to operate ok. 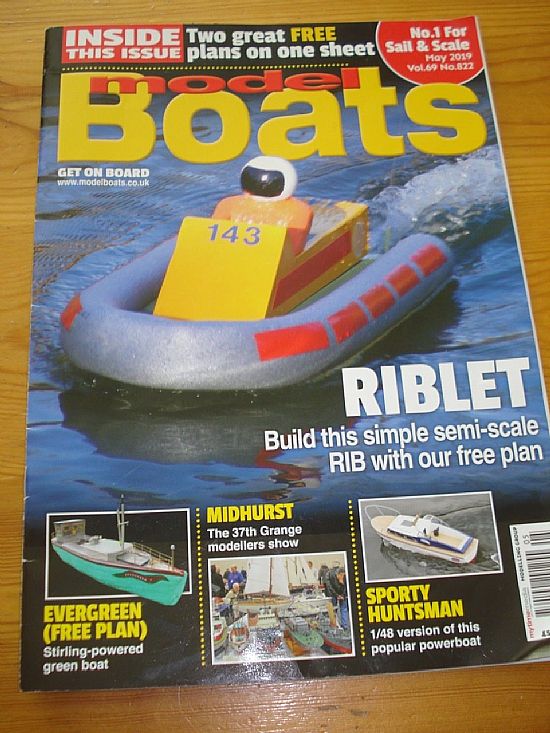 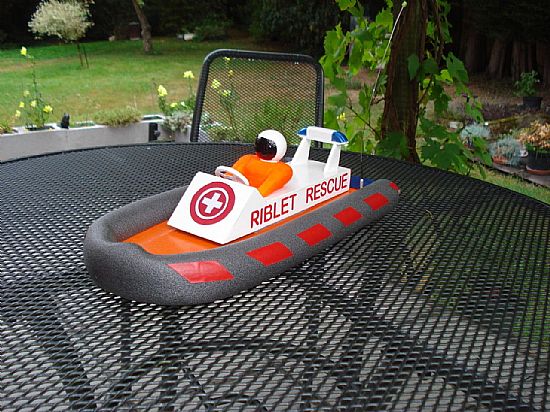 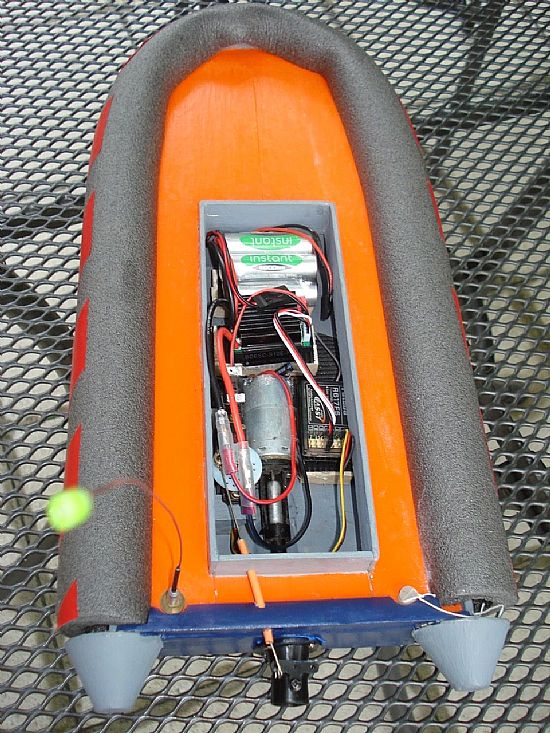 Acquired through an eBay auction, lucky winner of a £10.00 bid, and only at Eastbourne. The seller did say there was some damage to the hull and the rigging was not brilliant. Mast split, hull almost in two pieces and other holes, rudder snapped off, bulb fractured in three places and It was all so filthy. But l did leave with a part finished Swordfish and gave the seller £20.00 for both.

I probably would not have tried to repair this model if l had not got time on my hands, l couldn’t go shopping for bits so it had to be worked on with materials l already had in stock.

I super glued and epoxy resined the bulb pieces together, hull repairs with glass fibre,  used P38 for a filler. Bound the splits in the mast and replaced some of the deck.  A rattle can of primer and a lot of rubbing down. Finishing with two cans of Mars Red (VW Beetle colour) and deck of yellow filler coat and sealed with clear lacquer.

The sails that came with the yacht are dated 1988 but it’s doubtful whether they were the original suit.

The Marblehead yacht was first introduced in 1930 and became an international  class in 1937 and is still raced to this day, of course the model has changed considerably since its inception  and l would guess that the beam of my particular yacht is probably 1/3 wider than its younger brothers. 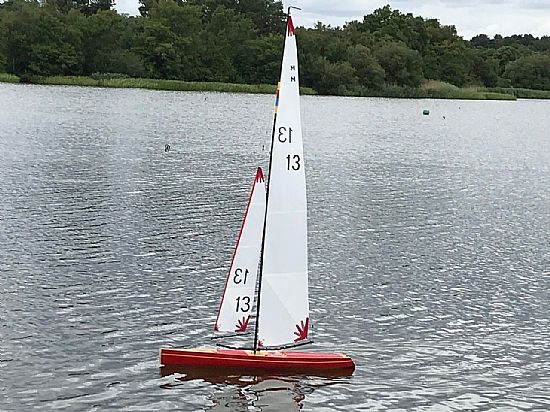 This is based on a boat I have seen and sailed in Norfolk. It's an approx 1/12 scale of a lug rigged half deck daysailer. A jig was made first and the hull built on it using super glue.

Hardwood used for planking and (just for the bean counters) 90 strips of wood used. In fact the entire build to date is from scrap wood cut to size on my homemade small saw bench 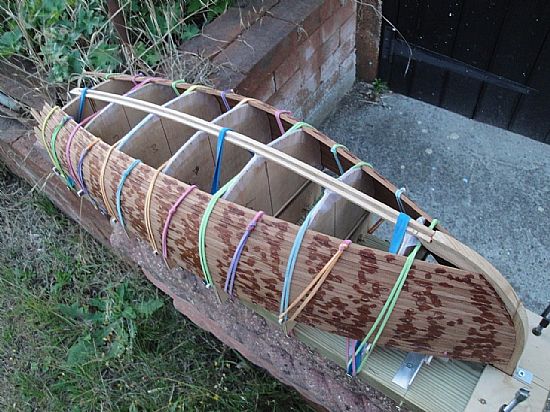 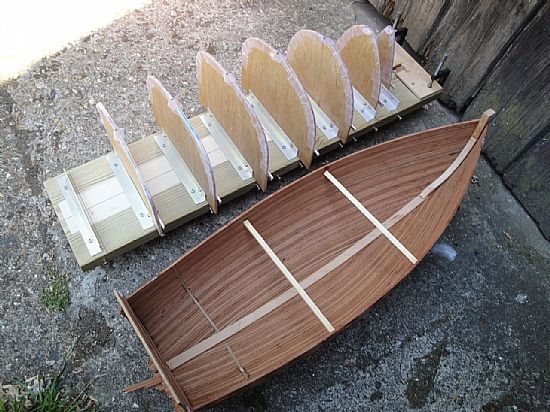 Here is my latest build it is called Footy Brando

Built from plans found on the wooden boat store website

The hull is built entirely from balsa with mahogany trimming 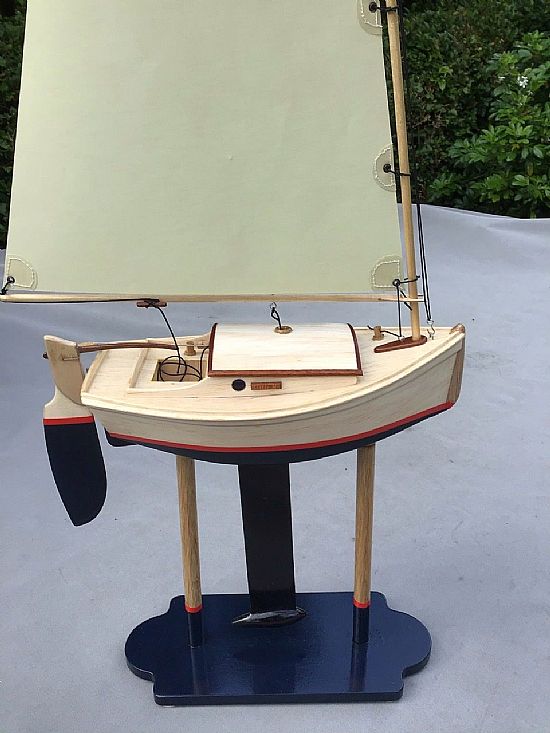 I have managed to pick up an old project I started when I was a teenager!. The model is a sort of salvage vessel/tug type fictitious catamaran thing. Although it’s only a hull at the moment, it is sealed and has had an initial floatation test. Top tip, only build models that fit in the domestic testing tank (i.e. the bath). I had to buy a large plastic 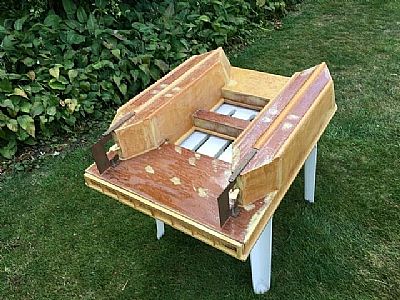 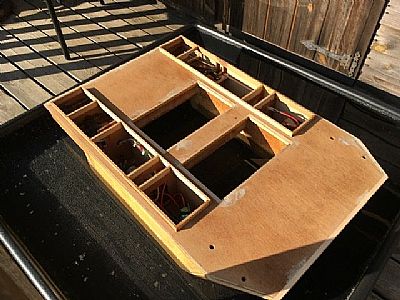 This is my vintage pond yacht which was built by my Father in the late 50s early 60s from a Marinecraft kit with F G hull. It was developed as a free runner and we sailed it at Stoke park before later converting to single channel radio on rudder only. About 20 years ago I found it in the loft and converted it to modern radio sail arm and rudder servo 40 meg now on 2.4 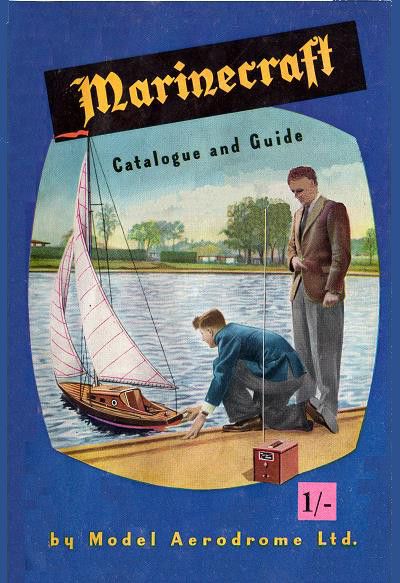 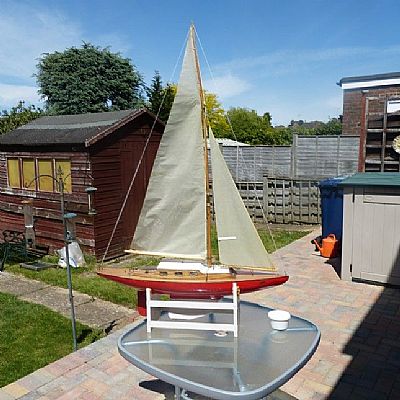 The model was featured together with a free plan in the October 1991 edition of Model Boat magazine and it has been on my bucket list to build ever since.  The boat was built by Thornycroft in 1931, requisitioned by the Navy during WW2, she was one of the ‘Little Ships’ that took part in the Dunkirk evacuation.

Post war she passed through a number of owners before being rescued in a very dilapidated state from the South of France in 1984. Essential repairs enabled her to return through the French canals to England to undergo a complete restoration before being recommissioned in 1986.

The model is now at the stage in the photo with the hull painted and work progressing on the superstructure. Planking the long fore deck was a long and rather tedious task but I am now making steady progress which will soon slow again as the task of planking the aft decks is looming.

The hull displacement is quite low so I am striving to keep the weight down which has included the manufacture of bespoke prop shafts made from 2mm diameter stainless steel rod running in small phosphor bronze bushes that I turned up on the lathe. It is the first model that I have scratch built with a varnished wood superstructure and matching the mahogany veneers and sections is proving a challenge that I didn’t anticipate.

Having said all that, building a model must be one of the most therapeutic pastimes for a dull day under lockdown! 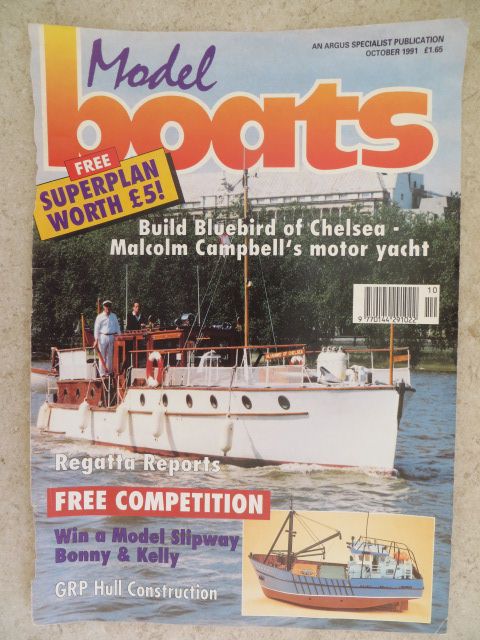 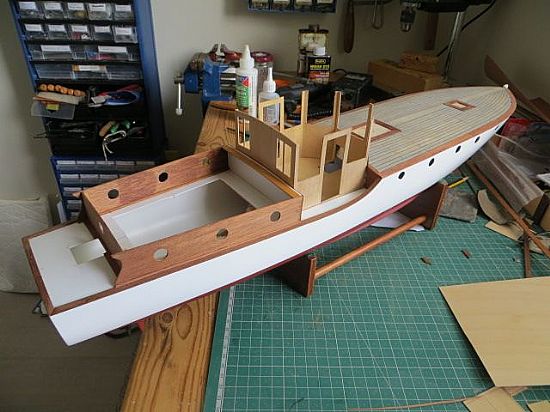 As some club members may remember from last year I embarked on a project to develop a working model of Donald Campbell’s Bluebird K7 powered by an electric ducted fan. Coming into boating fairly recently from a model aircraft background I was looking for a “bridge” project that allowed me to utilise some aeromodelling skills.

Progress is ongoing but was delayed by some collapsing floors at home which diverted my energies for a few months. Happily (apart from Corona Virus delays) the project is moving forward again.

My approach was to use the scrap box to build the first prototype. This was aimed at proving the hull and sponson design, angles of attack and the C of G. Speed performance was secondary at this stage.

I found a 70mm diameter, 3 bladed fan, a 2200mah, 3 cell lipo and built it around this, hence the slightly odd scale of about 13:1. I lifted an A4 outline drawing from the internet (which subsequently turned out to not be true scale) and produced the first prototype, which I have christened “cartoon scale”.

The attached short video shows the very first run, which showed a positive sit on the water with some movement up onto the plane, but was horribly noisy. It also suffered a rudder servo failure. So much for using the scrap box.

I have just finished the wiring and testing of the new power train in Bluebird, which certainly looks promising. Up from 280 watts to just under 600!! 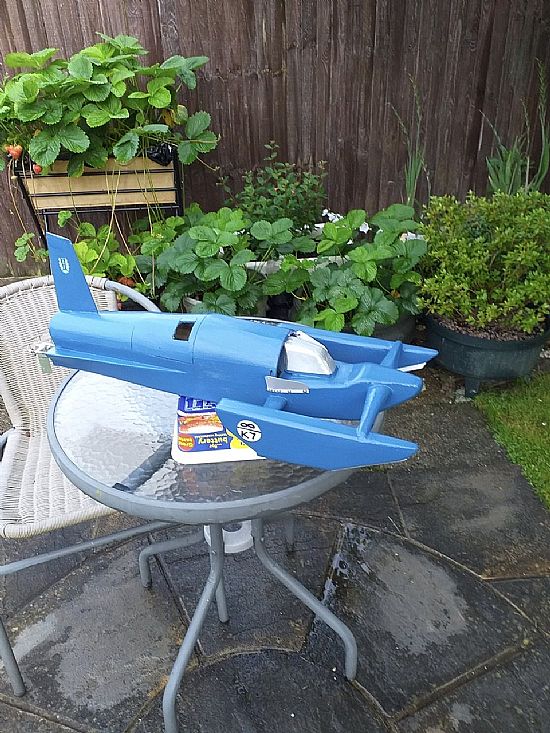 Mike has been busy working on another project based on his scrap box with hulls made primarily from Depron with some ply, balsa & carbon strips, using a lightweight glass cloth to cover the hulls and spray with whatever paint is available. Mike has a cheap winch and every thing else needed including a spare 65 A rig. Total outlay will be less than £30 on the water. 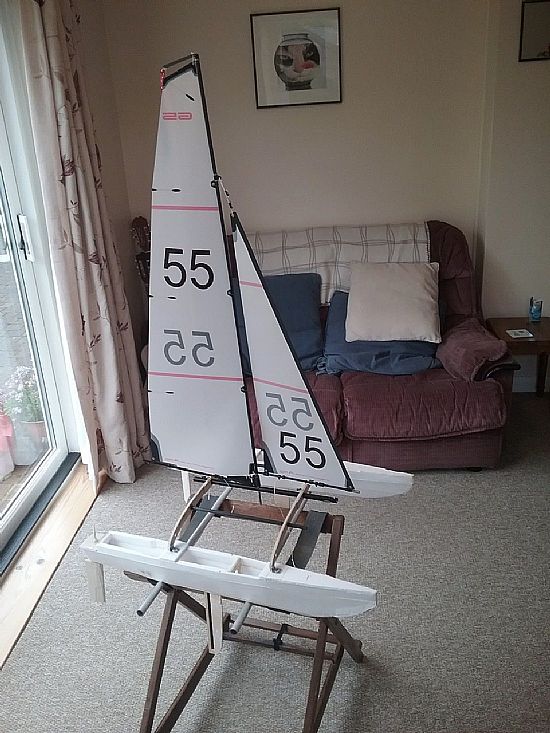 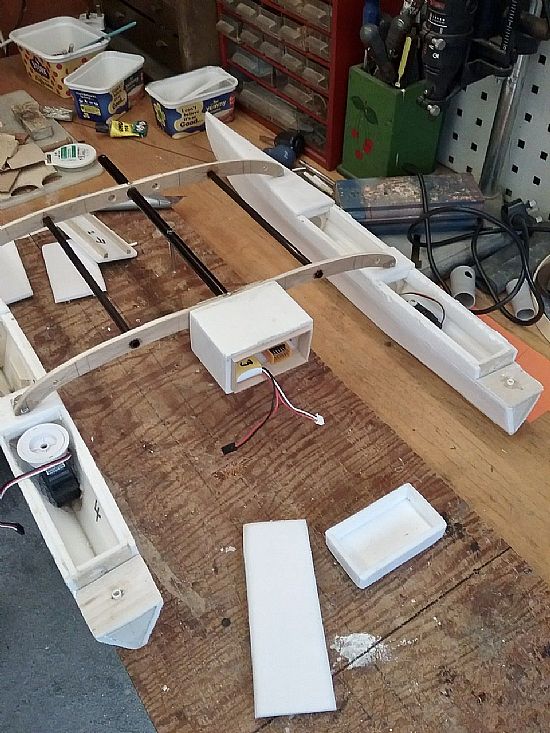 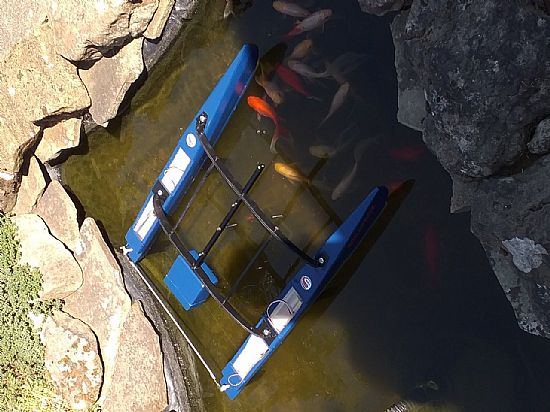 Here are some pictures of my build:

It is called "Emma", a gaff rigged sloop (not scale) from the Bearospace website built from plans. 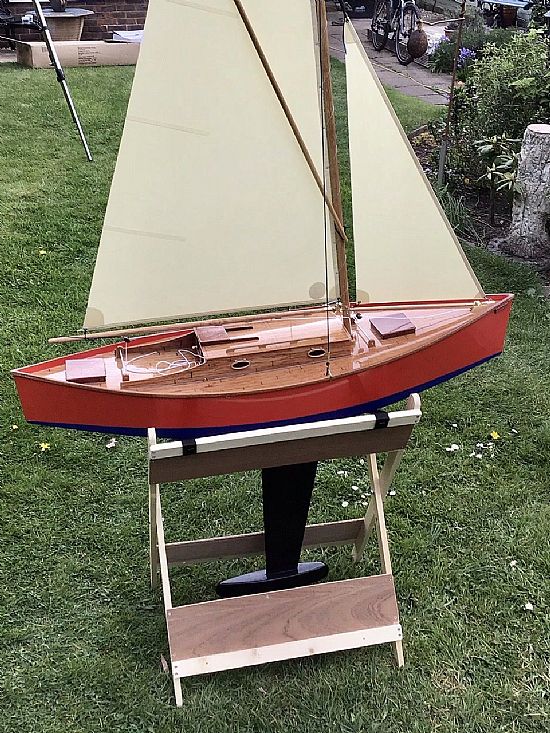 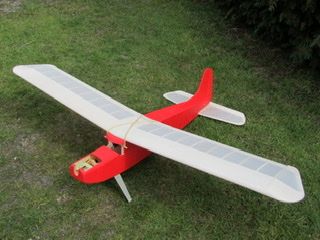 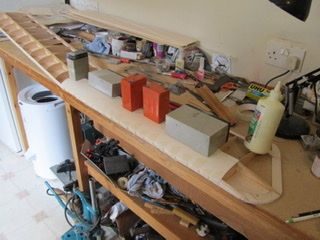 The model is an old design, a KK Super 60 built from a Ben Buckle plan.  The original had a 63ins span wing, yes strange(!), which in my case is extended to 69ins.  The model has aileron, rudder, elevator and throttle control with a Saito 40 four stroke up front for power.

Interesting that you are including a few Aircraft models as I have a couple that I can show members.  They are both unflown examples and many years old!  One is  a Graupner Cirrus 10ft wingspan Glider with  ailerons, elevator and rudder control. Fibreglass fuze and made up wings.  I rescued this as a crashed example and repaired the Fuze and wings etc.  However without the necessary flying skills it has never been in the air since.  It could be easily converted to electric power either with a pod above the wings or directly through the nose as per modern gliders.  There is a good number of videos of Cirrus on You Tube if you type in the search.  It is a beautiful aircraft and a very good slop soarer or thermal glider.

The second is a sweet kit of 2m wingspan with a nice T tail configuration for  elevator and rudder only.  I would be interested in selling wither or both of these models as I have not the time or the skill to fly them. 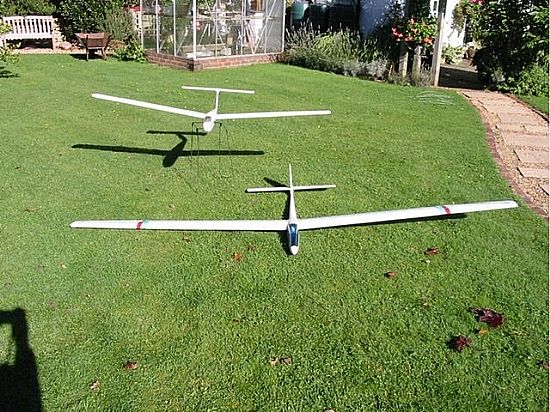 Steve has developed an interesting swing rig for his DF65, reducing the size of the jib to maintain the usual balance of sail area on these rigs. My guess is the boat might be slower upwind but faster down, it will be interesting to see. 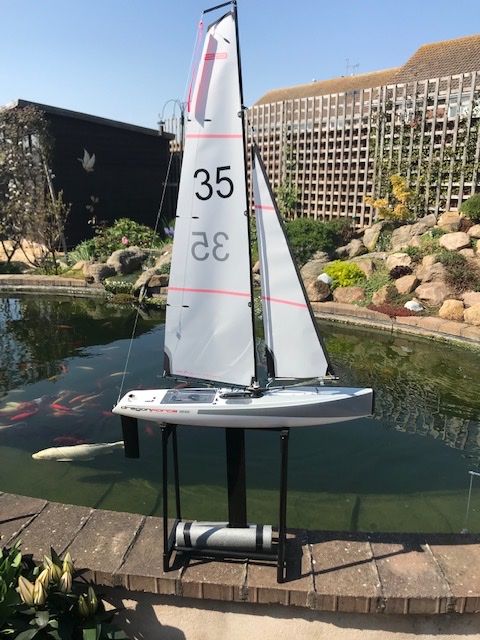 My eagerly awaited new "Maiden" IOM to a design by Damian Ackroyd/John Taylor. Now launched at Frensham on Tuesday 19th May. 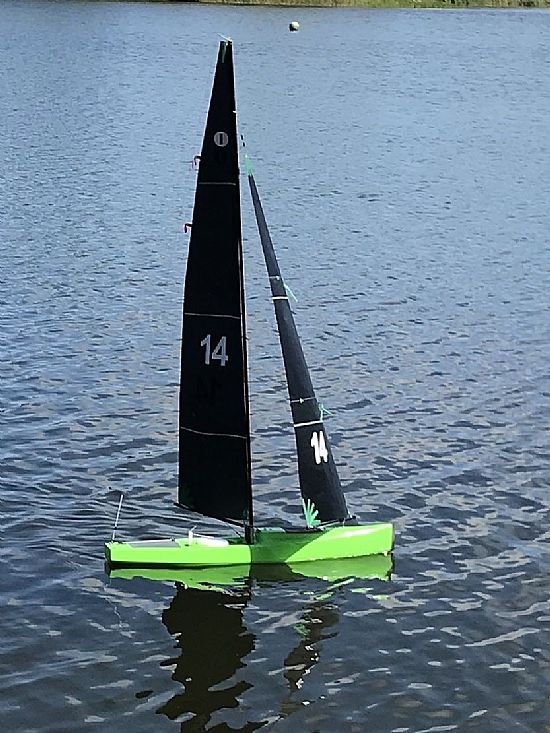